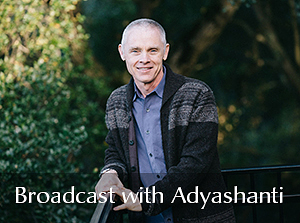 There is a specific kind of fear that arises when the ego contracts in the face of the Infinite, when we move from one state of consciousness to the next. In this encouraging broadcast, Adyashanti offers insightful guidance for those experiencing this kind of fear. “When we face it head on, the fear will immediately feel like it is diminishing. What was afraid of dying can die.” Viewers of this broadcast reported it as “important," "supportive," and "liberating.”

“When you really let go, it’s like an apple falling from a tree. You’re just simply immovably present. You do not turn away. There’s nothing your consciousness can throw at you that’s going to get you to run. You realize there's nothing to fear to begin with.”

“There is a central mystery of existence, and that just happens to be the central truth of us. I would suggest there really isn’t a 'why' things are the way they are. Everything interacts with everything else and is affecting everything else. The reason for any one moment is literally all other moments that have happened or are happening.”

“You change one moment, and it changes the whole. Everything is literally causing everything else in the entire universe and beyond.”

“Love of life itself, for the world around you, can get you to let go of fear as a loving act. You let go for the sake of all beings. You connect to a wider reality, a wider concern. It brings up capacities that you don’t usually find. It connects you to the greater community of beings, for the well-being of all beings.”

“The ultimate solution is to wake up from the dream.”