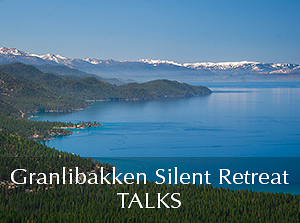 This 6-download set contains all of the Morning Talks from the May 2017 silent retreat at Granlibakken Conference Center, including the first evening talk.

Please Note: The Q&A Sessions and Guided Meditations from this retreat are available for purchase separately.

"Compassion for the world is what brings you out of the internal heavenly state."

"95% of what human beings experience as suffering comes from the arising of self-consciousness."

"There is no self in self-consciousness. The self is inferred, not actual."

"Awareness is that which is the same no matter what state our consciousness is in."

"When you stop interfering, whatever you're dealing with will transform right before your eyes."

"Being still is actually the ultimate act of respect, dignity, and compassion."

"Every little speck in the entire universe is an expression of the fundamental nature of reality -- everything. Nothing is left out."

"The very effort to try to change things actually obscures the true nature of what we're trying to change."

"Awareness, and that which it is aware of, is one same suchness."

"The idea that God is a cosmic good guy is ridiculous."

"As soon as you attach to it, you turn a truth into an illusion."

"Undifferentiated being is not perceivable by dualistic consciousness."

"The part of your being that is unconditioned has no problem with your humanity."