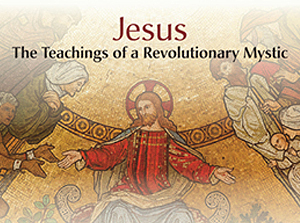 In this unique download set recorded live on retreat, Adyashanti explores how the story of Jesus represents many facets of the path of spiritual awakening. Referencing biblical gospels and passages, he illustrates how Jesus’ life not only demonstrates an awakening beyond the false self to our true divinity, but also how Jesus portrays the embodiment of divinity in human form. Through talks and dialogues with retreatants about their awakening process, Adyashanti also draws parallels between Christian and Zen stories as he helps to uncover lost jewels of Christianity.

Please note: This 6-download set is Part 2 of the retreat. It includes talks and dialogues from Tuesday, March 26, through Friday, March 29. Part 1 and guided meditations must be purchased separately.

Part 2 Topics Include: Jesus’ Offering of Body and Blood / The Disciples’ Imagined Divinity / Jesus Embodies Spirit / Ego Death / The Lens of Pure Perception / The Infinite Incarnating into Form / Embodying Infinite Potential / The Two Human Fears / What No Inner Life Means / True Repentance / Karmic Release through Redemption / Seeing with Sincerity / Understanding Pontius Pilate / Take What’s Given Now / What is True Prayer? / The Simplicity of Awakening / On the Gospels of Mark and John / The Resurrection within You / The Crucifixion / Two Ways of Letting Go

“The messiah is a servant of mankind, not a ruler over mankind.”

“Empty yourself of all identity, even divine identity.”

“Align yourself with that which has no complaint.”

“The truth of your being continually surrenders itself to each moment.”

“The thread of love runs through the Christian story -- it’s love that says yes to incarnation.”

“The world of human incarnation is nirvana.”

“It takes humility to embrace your humanity.”

“Jesus never condemns people for being weak or human, but for utilizing power to diminish others.”

“Stay with one thing -- the presence of your being.”

“Consciousness is as adept at coming out of mind as getting lost in it.”

“There’s no prison until you believe the next thought.”

“A story has the a power to creatively evoke your deeper nature. But if you put it in the world of time, it becomes a locked door instead of a transparent mystery.”